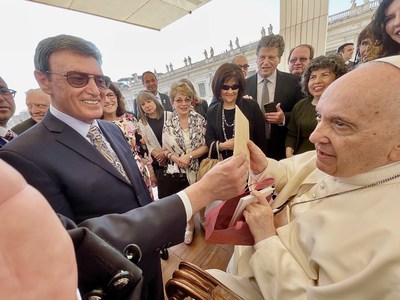 ROME, Italy, May 14, 2022 /PRNewswire/ -- It was a historic week in Rome and within Vatican City as a delegation of Italian American leaders met with government officials and Pope Francis to advance cultural and religious initiatives — and to set the stage for new economic opportunities — between the U.S. and Italy.

Italian, Italian American and Vatican officials have sparked a new era of strategic partnerships and diplomacy in Rome.

The delegation, assembled by Judge Basil M. Russo — who leads The Conference of Presidents of Major Italian American Organizations (COPOMIAO) — conducted a panel discussion with Italian Supreme Court justices, met with the Italian Deputy Minister of Foreign Affairs, and sat down with the Vatican's Secretary of State to pinpoint issues of mutual concern.

"Our Catholic faith is such an intricate and essential part of our heritage that it, more than anything else, defines our Italian American identity. It deserves newfound focus and attention," said Russo.

The landmark visit to the "Eternal City" is a first-of-its-kind event and one of many new summits that are designed to preserve and promote Italian American history, traditions, institutions, and financial and cultural connectivity to Italy.

"In the last 18 months alone, COPOMIAO has unified hundreds of Italian American organizations to preserve and revive the culture our ancestors brought with them from Italy," said Russo. "Now we're forming strategic partnerships and alliances throughout Italia to bring our journey full-circle."

Meanwhile, discussions are underway with The White House, Italian American politicians, various museum officials and top educators to promote public policy, advocacy initiatives, and the Italian language in the U.S.

Additionally, COPOMIAO will sponsor an Italian American youth summit in Florida next year to energize the younger generations around our heritage.

Formed in 1975 and based in New York City, The Conference of Presidents of Major Italian American Organizations (COPOMIAO) is comprised of 54 of the most influential cultural, educational, fraternal and anti-defamation groups in the nation.

SOURCE The Conference of Presidents of Major Italian American Organizations